For some bizarre reason, one of my favourite areas of collecting is uranium glass. Why I should be so fascinated by something so apparently deadly is beyond me, but I like many others before me, am totally hooked. Although I am assured that it is completely safe and that any radiation emitted is little more than the standard background radiation that we are exposed to on a daily basis, there is always that lingering doubt at the back of my mind. This was highlighted a year or so ago, when I sold an Art Deco uranium glass rocket vase to a customer in France via eBay’s Global shipping Program (GSP). The item arrived at the GSP depot in the UK, but I was then informed that they would not be transporting it any further. The customer was immediately reimbursed at eBay’s expense and the rogue ornament at the centre of the controversy was left to its fate…whatever that was! It may just have been, that by going through the Global Shipping Program, the couriers would have had access to the listing record which stated ‘uranium glass rocket vase’ and the sight of ‘uranium’ and ‘rocket’ in the same sentence was enough to instil fear into the unenlightened and send them into a blind panic. Or, in these days of heightened security, perhaps it set off a Geiger counter and sparked a full blown alert at the airport? The vase in question was of a particularly low density, so the latter scenario seems highly unlikely, particularly when you consider that up until a few years ago the tails of Boeing and other aircraft were filled with more than enough depleted uranium – used as counterweights –  to send the needle of a Geiger counter off its scale!

Interestingly enough, it seems that the cosmic radiation passengers are exposed to during a plane journey, is far higher than anything radiating from a typical piece of vintage uranium glass. So there you have it…collecting uranium glass if far safer than your annual package holiday!

And if making glass out of uranium wasn’t bizarre enough, one confectionary manufacturer decided to use it to sell their chocolates! I recently purchased this wonderful pair of Art Deco frosted uranium glass sailing boats. According to their registered design number 812656, they were registered by Czech manufacturer Carlshutte in 1936. I was rather puzzled by the separate sail sections which take the form of flower frogs, until I read the accompanying letter contained within the lot. The hulls of the boats, although large, are far too shallow to support your average flower stem and I suspect that the previous owner was also suitably puzzled. Thanks to their invaluable research, the letter revealed that these boats were used by confectionary manufacturer Needler’s Limited in 1938, as a container for their chocolates and that their subsequent use was for growing bulbs! 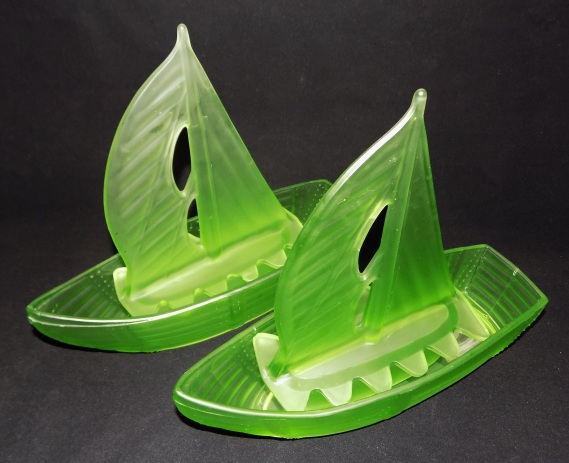